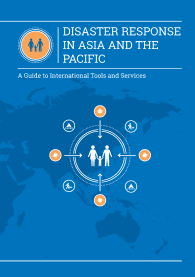 Disaster Response in Asia and the Pacific (English)

How do international and regional tools and services support disaster response in Asia-Pacific?

Asia-Pacific is the world’s most disaster-prone region, so disaster management is a regional priority. Over the past decade, most countries in the region have established national disaster management authorities and systems that are increasingly capable of managing an effective disaster response. In addition, the growing prominence of bilateral response arrangements, grounded in South-South Cooperation, and the increased capacity of regional organizations are contributing to a more diverse response system. As a result, disaster management and response in the region is based on strong national leadership, particularly in the context of natural disasters, with regional and international actors complementing Government efforts when required.

Nationally-led disaster management includes not only the Government, but also the ‘whole of society’, including the military, the private sector, civil society, and most crucially, the affected communities themselves. In Asia-Pacific, local communities are always the first and last responders, so disaster management is strengthened when communities are actively engaged, particularly through community-based approaches to disaster risk reduction that build on local capacities. If humanitarian actions are to be genuinely relevant, timely, effective and efficient, disaster-affected communities must be placed at the centre of all humanitarian action, and they must be actively involved and engaged before, during and after a disaster.

Recent experience in the Asia-Pacific shows that international assistance is most critical during the first weeks following a major natural disaster, and that effectively scaling up response in rapidly-escalating complex emergencies requires robust and sustained advocacy and coordination. The response should focus on the immediate needs of crisis-affected people, work through and in complement to national systems, and draw primarily on resources available in the affected country and region. When necessary, international resources and expertise should be mobilized to fill identified gaps (Figure 1).

Why has the Guide been produced?

Disaster Response in Asia and the Pacific: A Guide to International Tools and Services (hereafter referred to as “the Guide”) was updated in 2017. The original 2013 edition was produced following the 2011 Regional Humanitarian Partnership Forum (RHPF) for the Asia-Pacific Region held in Shanghai, China. At the workshop, United Nations (UN) Member States and other humanitarian stakeholders requested a handbook to guide disaster managers in understanding the interaction between national, regional and international humanitarian response mechanisms. The original Guide was developed in consultation with Government officials across Asia and the Pacific and representatives of intergovernmental organizations, the Red Cross and Red Crescent Movement (RCRC Movement), national and international non-governmental organizations (NGOs/INGOs), donors and other key agencies worldwide. These partners were also consulted for the revised Guide.

What is the purpose of this Guide?

Who is the Guide for?

What is the scope of the Guide?

How can the Guide be used?

How is the Guide organized?

DISASTER RESPONSE: assistance and interventions provided during or immediately after a disaster to preserve life and meet the basic subsistence needs of those affected.

EMERGENCY RESPONSE PREPAREDNESS: pre-disaster activities undertaken to minimize the loss of life, injury and property damage in a disaster, and to ensure that rescue, relief, rehabilitation and other services can be provided following a disaster. Preparedness for the first and immediate response is called “emergency preparedness”